For me, the end of August in Iowa always ushers in an atmosphere of a fresh beginning as my kids embark on a new school year. The time is preceded by new clothes, new school supplies, new class lists, new schedules… you get the idea.

My oldest son, Parker, is now in the 2nd grade and this year marked his first at a new school. For him, the weeks leading up to the first day were a mixing pot of nervousness, apprehension, and all-around curiosity as he wondered what life would be like in his new digs. Almost daily he asked me specific questions (that I had no answers for) about what he would experience, but all I could do was assure him that everything would work out in the end.

On the evening prior to the big day the school wisely setup an ice-breaker event where students, and their parents, were encouraged to visit the 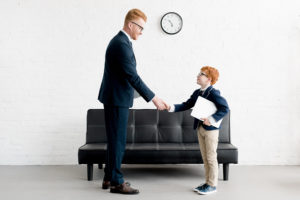 building to drop off school supplies and meet the teachers. It was during this event when all of the uneasiness my son was experiencing jumped out the proverbial window and all that was left, in his mind, was an inspired perspective of newness and camaraderie among him and his classmates.

After that, the kick-off to the year went as smoothly as one could hope, but it really got me thinking about how my son’s sequence of feelings isn’t all that uncommon, even for us “grown-ups”. Some deliberate introspection on the situation lead to what I believe are three things that professionals can learn from his experience, all of them related to expanding our networks.

I bring these points forward not to insult your intelligence, but simply as a reminder of the power of being around other like-minded people. In the busyness of life it can be easy to procrastinate the effort it takes to become involved with others in your industry, but if done right, it will always be worth your while and can even lead to a renewed energy for yourself and your team.

Master Builders of Iowa has dozens of events every year that give you a chance to get involved in Iowa’s commercial construction industry. Our next round of events are our Regional Membership Meetings which take place this year October 2nd-16th at various cities throughout Iowa. These events are open, free of charge, to all employees of MBI member companies. Companies considering membership with MBI can also receive a special invite to these events by contacting me anytime.

Your new best friend could be waiting!