If you have walked up 3rd street in downtown Des Moines to an event at Wells Fargo Arena, you’ve probably asked yourself, ‘Why is there a giant hard hat along the sidewalk?’  Once you realized the office next to it has ‘Builders’ in the name, you probably shrugged it off.  But, the thing most people don’t know is that it is more than just a cool sculpture – it’s a time capsule! 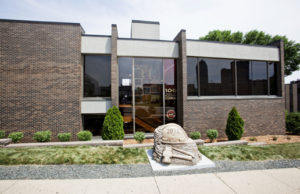 The idea was developed by the MB EYE on the Future Class of 2012 as a way to commemorate Master Builders of Iowa’s 100th-year celebration.  The class worked to contract Themescapes, Inc. to carve the unique piece and gathered items of the time to be placed inside.  The class decided that it should be opened in 50 years, which will be 2062.

It is actually pretty fun to think about and I encourage anyone that is in the Iowa construction industry, and born after the 1980ish timeframe, to somehow ‘save the date’ for 2062 to be on hand for the opening of the hard hat!  I highly doubt that MBI and the giant hard hat will still be located at 221 Park Street in 2062, but you never know, it might still be a ‘climbing’ fixture for all kids heading up to Wells Fargo Arena.

So, next time you are in downtown Des Moines, be sure to stop by and check out the time capsule!  And, we’ve heard that it has been incorporated into that Pokémon GO craze, so if you’re into that sort of thing, kill two birds with one stone while you’re here. 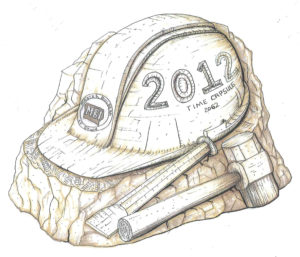