It’s pretty easy to say that the MBI conference room is where all the magic happens.  And by magic, I mean hundreds of meetings a year that generate countless ideas and initiatives for the association.  Combine all the MBI Board, Associate Council, committee, staff, and other business meetings, you’re probably looking at over 1,000 meetings with over 200 different individuals in one year alone!  It would be fun to know the number of different people that have sat around that table in the past 10, 20, even 50 years.  If you have ever sat in one of those chairs in the MBI conference room, have you taken the time to look around? 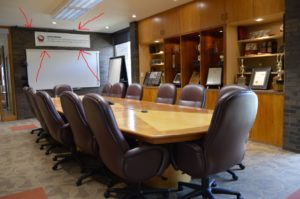 The first thing to mention is the MBI Mission Statement.  Chances are that this is the one thing that you have probably noticed if you have ever sat on a committee or board with MBI.  It is also normally the first, and only, thing pointed out in almost every association meeting.  In the nearly 13 years that I have worked here, (doing the math) I have probably witnessed this over 300 times.  It was a favorite of Scott Norvell and has seemed to rub off on current President/CEO Chad Kleppe.  Everything we do ties back into our mission:

MBI’s mission is to be the essential resource for improving member performance and promoting a business environment favorable to the construction industry. 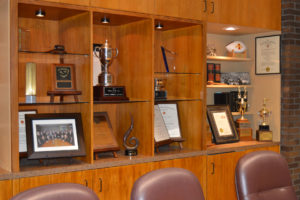 A large trophy case takes up pretty much an entire wall in the conference room.  Best part is, I bet there are even more awards that can be found throughout the office, tucked away in cabinets, and some that have probably lost their way over time.  But, here is a list of what can be found in the conference room:  AGC Chapter of the Year (X2); Iowa Prism Award; Honor Award; Partnership Award; Promotion of Diversity; community awards; Advancement of Construction Technology; awards commemorating our 100 years in business; AGC Student Chapter of the Year (multiple); contributions to ISU and UNI; and my personal favorite, AGC Constructiondising Award.  I had never noticed this one before today and the first thing I did was to Google it.  Came up empty, but it was presented to MBI back in 1953, so it looks like I need to start asking around to see if I can figure it out.  Maybe we’ll be able to have a future MBI blog post on what exactly ‘constructiondising’ is. 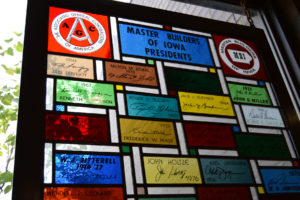 Next up, the beautiful display of stained glass.  Each pane within the four large frames of stained glass contains the signature and year of a past MBI Chairman of the Board.  I don’t know who came up with this idea long ago, but it was a good one. 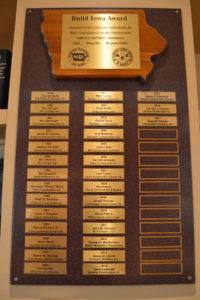 The Build Iowa Award was initiated in 1989 as a way to honor MBI members and to bring public attention to excellence in the construction industry.  Since then, the Build Iowa Award has been presented annually to an individual who best exemplifies the tenets of our organization: Skill, Responsibility and Integrity.  The nominees are judged by the way they have performed both within the construction industry and in their communities.  They can be an active or retired member, but membership within MBI is required.  To honor the exclusive group of individuals that have received the Build Iowa Award, a large plaque hangs in the center of the MBI conference room. 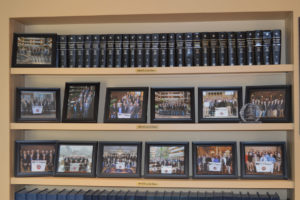 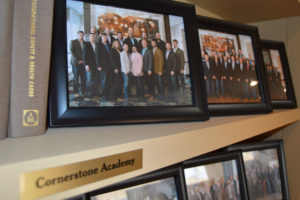 The final part of the conference room to point out are the shelves containing class photos.  With the help of committees over the years, MBI has developed top notch leadership programs for construction professionals.  Class photos of graduates from three of the programs can be found on display – MB EYE on the Future, The Leadership Experience and Cornerstone Academy.  We appreciate the companies and individuals that have been a part of these programs.  It is a great investment of time and resources towards the professional development of their entire team.

Next time you are in our office, be sure to take a few minutes to check out the history that can be found in the conference room.  You might even find your picture or name!